I had the great pleasure of seeing Peter and Benjamin Bratt’s latest movie and collaboration, La Mission this past Saturday, 7 November 2009 at the American Indian Film Festival (See link at the end of this post). I highly recommend that you see this film wherever it is playing. The film actually premiered at this year’s San Francisco International Film Festival in April, and continues to run the film festival circuit. It really needs to get shown in the mainstream theaters; so let’s see if we can make this happen.

I found myself wondering if I connected with the film so much because I lived many aspects covered in the film-La Mission, la cultura, and if that’s the case, how would those who didn’t be able to relate.

My answer: it’s a universal story in many respects. Everyone, if they connect with their human/humane side can find something in this film with which to connect. Peter Bratt is brilliant at drawing his characters in such a sympathetic yet truly human manner. Nobody’s perfect, yet even the flaws in his characters are drawn beautifully.

Because my blog is primarily about design, I have elected to briefly discuss the poster shown below and comment on the artwork done on the “lowriders/cruisers” featured in the film as well:

The poster, designed by Florencia Garcia, has a graphically strong visual hierarchy, bringing the viewer in from top center by an up close shot of the lead charachter, Che Rivera, played by Benjamin Bratt decorated in his “life medals.” We then are guided down the poster by Che’s downward position of his head and eyes to the film title, rendered beautifully and appropriately (to the subject matter), and a beautiful photo illustration of one of the “lowriders/cruisers.” The artwork on the “cruisers” is riveting. Both the poster and car artwork represent so realistically “The Mission” District here in San Francisco while paying homage to the multitude of incredible artists that came from this neighborhood. The murals are also well represented in the film. Here’s the poster and a short video from this year’s 52nd SF International Film Festival with the film’s renowned cinematographer, Hiro Narita talking briefly about the film. Also, artists Mike McArdle and Jesse Campillo, who did the artwork on many of the “lowriders” seen in the film share their part in creating these incredible masterpieces. 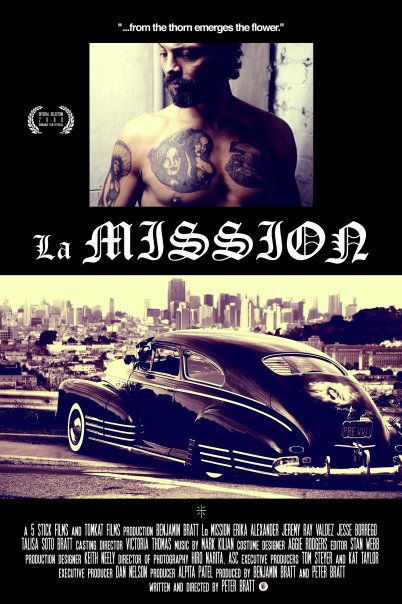